Conducting redox polymers (CRPs) are composed of a conducting polymer (CP) backbone and redox active functional groups (RGs) and they provide an attractive option as organic matter based electrical energy storage materials. The CP backbone renders the material conductive and, due to the large molecular size, prevents material dissolution thus mastering two of the most significant obstacles in achieving powerful and stable battery materials from organic compounds. The RGs, on the other hand, can provide high charge storage capacities to the material. Combining CPs with high charge storage capacity RGs thus has the possibility to form powerful (and possibly stable), materials for battery applications, provided that the individual properties of the CP and the RG components can be preserved and operate in synergy in the CRP. 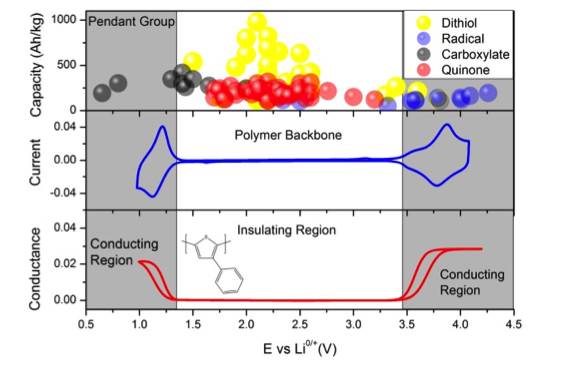 Figure 1: The upper panel shows the specific charge storage capacity and redox potential of dithiols (yellow), nitroxide radicals (blue), conjugated dicarboxylates (black) and quinones (red) that have been tested as active battery materials.[1] The mid- and lower panel shows cyclic voltammetry (blue line) and in-situ conductivity (red line) of polyphenylthiopnene in MeCN with the conducting and insulating regions for this polymer indicated as shaded and white fields respectively.

Conceptually CRPs include three principal units, the CP backbone, the RG and the link between them, and care needs to be taken in choosing successful combinations of the three units. CPs are only conducting in their charged state and conductivities can be achieved either by oxidation (p-doping) or by reduction (n-doping). Some CPs, for instance polyphenylthiophene, show both oxidatively and reductively induced conductivities, as shown by in-situ conductivity measurements of polyphenylthiophene on interdigitated array electrodes in figure 1, while other polymers show only p- or n-type conduction.[2] In order to benefit from the CP conductivity the RP needs to have a redox potential within the conducting region of the CP backbone.[3] In figure 1 the redox potential of several organic compounds that have been tested as active battery materials are presented together with their specific charge storage capacity. The materials have been divided into four categories: dithiol-, radical-, carboxylate- and quinone based, and the data is taken from an extensive review by Liang et.al.[1] With polyphenylthiophene as CP only a few RGs show redox matching with this CP. Fortunately the conductivity regions can be altered by the choice of CP backbone and, to some extent, also by the supporting electrolyte. Also the RG redox chemistry can depend on the electrolyte system, why care is needed both in choosing CP-RG combinations and in the choice of electrolyte system. In this work the design principles, including energy matching between RG and CP and the nature of the link, will be outlined specifically for electrical energy storage in CRPs.