Professor Thomas R. Bieler completed his Ph.D. in Materials Science (minor in continuum mechanics) at University of California at Davis in 1989, and has been at Michigan State University thereafter.  His research focuses on characterization of mesoscale deformation mechanisms and plasticity modeling in titanium based alloys, tin (lead-free solder joints), and high purity niobium used in superconducting particle accelerator cavities.

Prof. Bieler received one of the Madrid regional Atracción de Talento fellowships for visiting researchers, that allowed him to spend a year (between 2017 and 2018) collaborating with the IMDEA Materials Institute and the Technical University of Madrid by joining experimental data with modeling polycristal microstructures (like the ones metals and alloys have), in order to identify and understand how cracks appear and propagate in these materials. 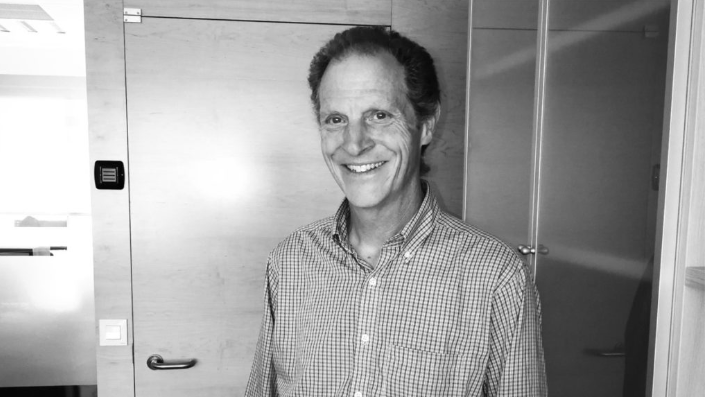 Starting this interview, can you tell us a little bit about your trajectory?

I have been interested in the interface between solid mechanics and microstructures in metals throughout my career as a professor at Michigan State University. The microstructure of metals is designed and controlled by plastic deformation, and in many applications involving elevated temperature, the microstructure evolves, so that the properties also change with time and service.  The ability to understand this phenomenon and ultimately to simulate it with computational models is what has motivated my work for a long time.

For those that are not familiar with Michigan State University, what can you tell us about it regarding its main research areas and how differently it functions from a Spanish institution?

MSU is a huge general-purpose university of about 50,000 students, in which students can study nearly any major. It is one of the ‘Land-Grant’ universities, so its charter is to be a state government supported secular university whose purpose is to educate (primarily) residents of the state so as to enhance the welfare and development of the state’s economy. The College of Engineering is nearly 1/5 of the student population, and there are about 10 engineering majors.  From my understanding, Spanish universities consist of faculties that are more independent than is common in the USA (at least historically), and the curriculum is more focused on specifically what is needed for a degree.  In contrast, most universities in the USA require some general education content with coursework not related to one’s major, though this is highly variable.

More precisely, what are the research goals of your group?

To develop experimental datasets that enable advanced material models to have the means to assess the quality and accuracy of their ability to simulate specific experiments involving complex heterogeneous deformation at the microstructural scale. Ultimately, we seek to understand how damage develops – for example, how does a crack become a crack, when there was no crack there before?

When did your relationship with IMDEA Materials begin?

Indirectly, when a colleague/collaborator of mine in the office next door took a sabbatical at UPM (Carl Boehlert) about 6-7 years ago. He has championed research collaboration and education exchange programs with UPM ever since. Several of the students who have done research in our metallurgy group have spent time at IMDEA doing experiments, and UPM students have been in the classes I teach at MSU.  Carl is mostly focused on experiments, and I am in the interface between experiments and modeling, so I am pleased to be working in both areas with colleagues here at IMDEA, in an area I have wanted to develop more, but have not had the time or student man-power to pursue.

What are the main differences you have seen from the way young scientists are trained in Spain with respect to the US and which things you think that we should try to mimic?

Interesting question. I think it would be better to ask some UPM students who have studied at MSU or elsewhere, this same question.  As I have participated in teaching a class at UPM this semester, I have some, but very limited awareness of similarities and differences.  In the USA, the academic culture may be more competitive than in Spain (grades for classes rather than a pass/fail approach), which allows those who want to excel to have a stronger incentive to do so.  There is a keen interest here at IMDEA about how to foster innovation that leads to new product development.  Innovation is one of the strengths of the USA, but it is a mystery to determine how to develop this intentionally (for example, why did this develop in Silicon Valley and Boston so strongly, but not in the Midwest?).  Some features that may facilitate innovation in the USA may be a less established culture – with fewer historical social and governmental constraints, and an emphasis on a level playing field (ideally a classless society – all men are created equal – but this is quite difficult to actualize).  There are many opinions about what enables innovation, and they go to the root of culture and the purpose of life.

Very often, successful scientists have a critical point in their careers, normally during their post-doc period, and marked by finding a different research topic, a different way of working, etc., that mark their careers. Did something like this happen to you?

Yes, when I started at MSU, my Ph.D. research topic was no longer fundable. So, I had to find a different direction to aim. I did so in the area of x-ray diffraction methods used to account for anisotropic deformation characteristics in metals.  I did a lot of self-learning in a new field in which I had no training.  Much of my work since I started has been based upon x-ray and electron diffraction methods.

As you know, this interview will be read by IMDEA Materials’ alumni, but also from people that is currently working in our center. What career advice can you give to PhD students or early post-docs?

The part I like best about my career is that I get to be paid for being curious. Of course, one has to compete for funding and do all the bureaucratic stuff, too, which can be painful, but for me, being curious about how the world works (from ‘why did this happen?’, to ‘why am I here?’) provides a motivation for asking critical questions, and provides the basis for successful research thrusts.  The motivation for becoming famous (perhaps in a limited way) is a rather hollow motive that becomes too personal, and it leads to ‘political science’ that focuses more on the person than the discovery of new understanding.  One can often detect this motive in papers that use “we” too much.  Secondly, letting the data speak louder than my hypothesis is a good way to prevent science from being ‘political’ (by forcing data to fit a theory).  Sometimes the data take a life of their own, and a new set of motives and hypotheses emerge, leading to a fascinating discovery.  Also, notice what happens when things go wrong, and figure out why – one learns more from failure than success.  Unfortunately, publishing failures is not politically acceptable, though maybe science would advance faster and more objectively if we could publish failures without loss of face.

Last but not least, what are the things you are enjoying the most about living in Spain?

I am a curious guy. The geography, history, and culture of the Iberian peninsula has been mostly unknown to me, and there is no end of interesting things to learn about Spain and its history.  My wife (who is a historian) and I have traveled to see as much of Spain as time allows (we have traveled to a couple other places too, but mostly Spain).