International Day of Women and Girls in Science 2022: “Being a woman in science here and now” by Mónica Echeverry Rendón

International Day of Women and Girls in Science 2022: “Being a woman in science here and now” by Mónica Echeverry Rendón

If a day is commemorated, it is because something special has happened or will happen.

Since 2016, the 11th of February has a different nuance. Each year brings a louder voice that reminds us that science is one, universal and does not discriminate against race, age, condition and much less gender.

History has shown us that, for women, getting to this point has not been easy. Access to education, equal pay, the right to training and access to technology or types of jobs have been revolutionary issues that women have had and still have to fight for today.

Although the numbers have not balanced the scales of gender equality, there is an intention to change, and there are results to prove it. More and more, we are emerging as leaders in different fields. We show that with our versatility, we can be daughters, mothers, wives, friends, employees and scientists at the same time.

My personal experience goes back to my origins in my native Colombia, where the general cultural context marked by machismo did not impede me from realising my potential as a scientist and woman. I believe that my empowerment as a woman was cultivated by my father, who told me from a very young age, “you are a woman, you are valuable and you have to work to be someone in life”. Perhaps that is when I understand that what we are celebrating today has a strong emphasis not only on the woman conceived as such, but also on the woman child. Because it is in her that an idea is forged, a dream is created and it is at this level that changes are made in society.

During my personal and professional growth, I experienced different challenges that put me to the test with that lesson that was instilled in me since childhood. I am an engineer, a field that was an activity reserved for men in the past. I remember that when I was at university, the ratio of men to women in the faculty was still a little unbalanced. There was still talk of careers for men and careers for women at that time. Today, I’m glad to know that the numbers are giving way and that we now have more freedom to think about what we like better without so many social prejudices.

In my personal experience, I think it has been instrumental for me to think and believe that being a woman is not a particular condition; I believe that as a human being, I have the same rights as a man. I have always listened to my inner self, and I have never put limits on my abilities or dreams. That mentality has been my driving force to do things I never imagined.

In my perspective, I think that a winning ingredient in my case has been the culture that I spread. First, I convince myself that I can do it, then I plan it, and finally, I do it. Environments that have seemed a bit hostile for women because of the socio-cultural context have been a good training ground for me. For example, my time in South America and Asia have been strengthened by what I have learnt in cultures that are more open in these aspects, such as in Europe. In the end, all we need is an opportunity: when the door opens, we only see what is inside.

The Day of Women and Girls in Science is an international celebration that makes us reflect on the importance of highlighting the need for a more equitable society, where human values, knowledge and initiatives are the ones that stand out and that this is not anchored to gender.

We cannot only look at Marie Curie as the only representative of women in science. We have to know other stories such as those of Wang Zhenyi, Elizabeth Blackwell, Nettie Stevens, Alice Ball, Gerty Cori, Barbara McClintock, Rita Levi-Montalcini, Dorothy Hodgkin, Hedy Lamarr, Gertrude Elion, Rosalind Franklin, or Rosalyn Yalow, among others. In different areas and with different profiles, these women are a clear example of great temperance and character to be able to stand out in an unequal world. It is a reality that there are obstacles represented in barriers, myths, aberrations, and difficulties that women must face to do science. Still, it is also true that the outlook looks much better. To be able to speak out, to be able to participate with our own name, to be able to do what we want to do and then demonstrate our contribution to the scientific community are some of the achievements that women have made over the years.

The positioning of women should be given from actions, not from paper or intention. Do more and say less. Now the task is to work on our legacy to humanity. To strengthen and motivate our girls and boys and so that they recognise science as a powerful tool to change and improve the world.

I am Mónica Echeverry Rendón, postdoctoral researcher at IMDEA Materials. Bioengineering, M.Sc in Biology, PhD in Materials Engineering, PhD in Medical Sciences. My studies focus on biomaterials, tissue engineering and regenerative medicine. I am Colombian, I love coffee, cats and good books. I love to travel and explore the world. I have lived in Argentina, USA, Holland, China, and now I am based in Spain. I love science, and I know what I want to do for the rest of my life! 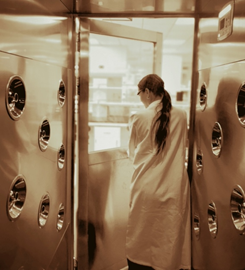